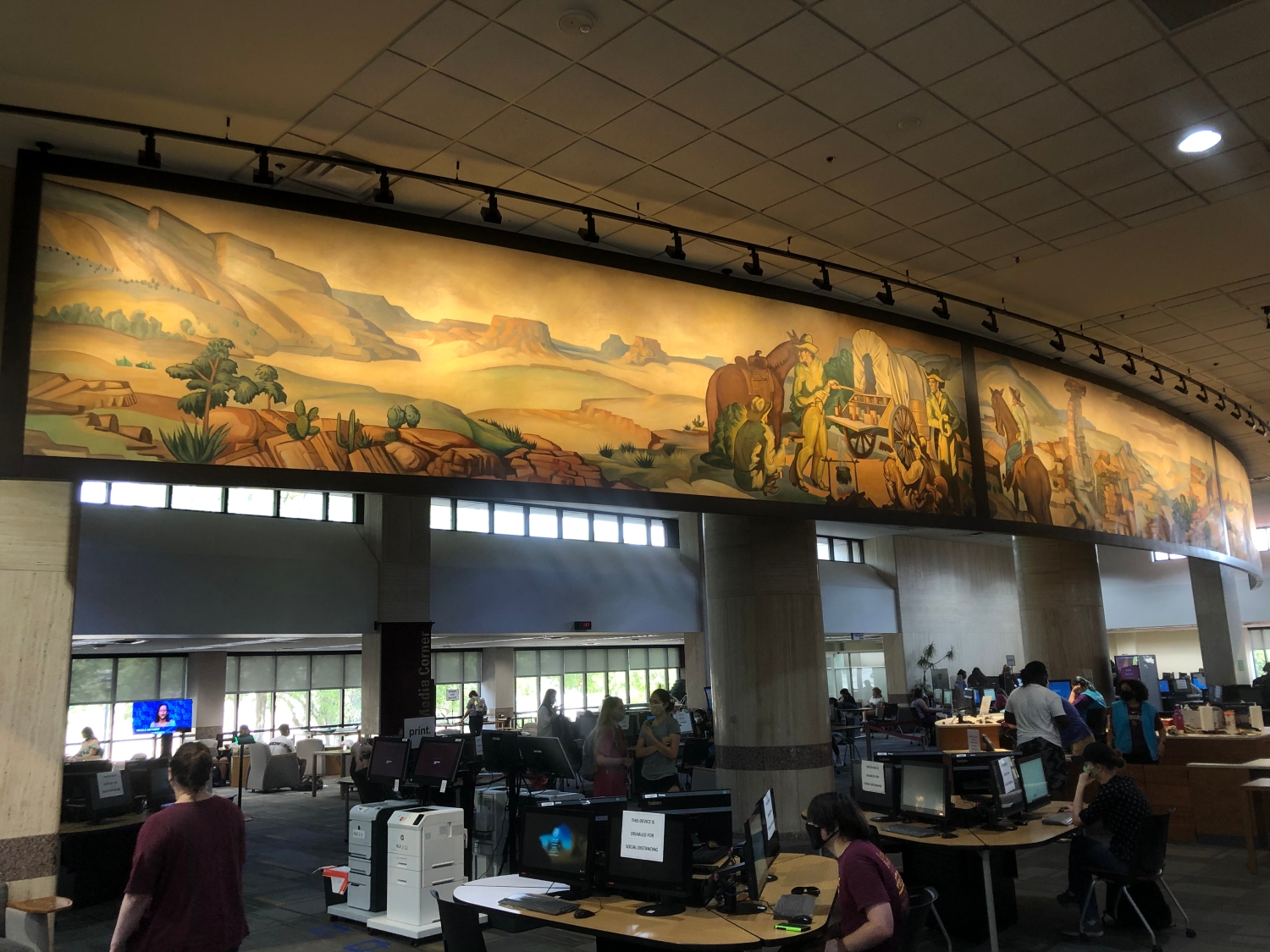 In 1950 the Wimberley, Texas artist James Buchanan “Buck” Winn was commissioned by the Pearl Brewery in San Antonio to paint The History of Ranching, a massive mural to adorn the walls of the Corral, the brewery’s oval-shaped hospitality room. At 280 feet, the mural was considered the longest in the world, depicting the story of cattle ranching in Texas—from its earliest open range days through the fencing of the range and the arrival of the railroad.

When the brewery remodeled the Corral in the early 1970s, the mural was cut into several pieces, removed, stored on the brewery’s grounds, and forgotten for more than 20 years. In the early 1990s, Dr. Dorey Schmidt of Wimberley tracked down the mural at the brewery, which then donated the pieces to the Wimberley Institute of Cultures. The Wittliff Collections received two of the panels as gifts and purchased a third from the Wimberley Institute of Cultures in the late 1990s—creating a contiguous span of 82 feet.

For the next decade, The Wittliff planned and raised funds for the restoration, conservation, and installation of its three panels in the Albert B. Alkek Library on the Texas State University campus. The mural had suffered unfortunate and significant damage during its removal and subsequent storage. Deep scratches, abrasions, and crimping marred its surface, and cuts significantly weakened areas of the canvas support. In 2012 we sent the canvas to Scott Haskins at Fine Arts Conservation Ltd., an expert in mural conservation. After cleaning, repairing and varnishing the canvas panels, the results are truly breathtaking.

The extraordinary installation includes a custom-fabricated wall, its support, and a frame whose arc spans 82 feet, all of which is suspended 3 inches from the library’s ceiling. Specialized lighting completes the project and truly brings The History of Ranching back to life. We feel it provides a dynamic visual experience for the many thousands of students, staff, faculty, and visitors who walk through the library doors each day.

The road from acquisition to conservation to installation of the mural has been long one, but the result has well been worth the wait!

Several other panels from The History of Ranching can be seen at The Hays County Government Center on Stagecoach Trail in San Marcos and at the Wimberley Community Center and Wimberley Valley Museum in Wimberley.

We are grateful to so many people who have been critical to the mural’s restoration and installation: to Dr. Dorey Schmidt for re-discovering the mural in the 1990s; to the Wimberley Institute of Cultures for donating two panels of the mural to The Wittliff Collections; to Buck Winn’s daughter, Kathryn Eoff, for her continued support over three decades, and to the many professionals who have executed all facets of this project, and especially to the many donors who have supported these efforts over many years.